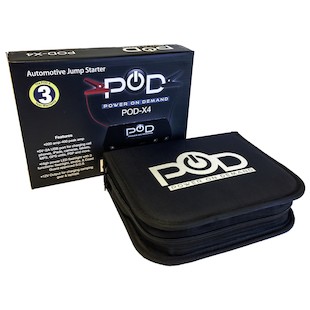 POD X4 Power Supply & Jump Box The POD X4 is the lightest portable power solution available to riders. In addition to jump starting any car, truck, motorcycle, or motor sports vehicle, the Power On Demand X4 also powers and charges all of your electronic devices, such as: laptops, iPods, tablets, cell phones, GPS units, PSPs, MP3 Players, Bluetooth devices, and more. Weighing under a pound and offering no less than 200A of jump-starting power, the peace of mind gained knowing that you can charge your bike or mobile device in an emergency situation is invaluable. Charge it once and take it anywhere. Features: Dimensions: 6.3 x 3 x 1inch Weight: Just under 1lb Output: 5V 2A 12V 10A 19V 3.5A Starting current: 200A Peak current: 400A 12V Output for charging camping gear and laptops 5V2A USB port for charging cell phones, iPads, tablets, Cameras, GPS units and more High power LED flashlight with strobe and Coast Guard approved 'S.O.S' Operating temperature: -20C 60C Up to 20 jump starts in one charge One charge lasts for 6 months unused Includes: 2 Adapter Cables 1 Home Charger 1 Car Charger 8 Notebook connectors 1 Jumper Cable w/ clamps Warnings: Do not reverse the jump-start operating procedures Stop using jump starter if battery indicator is less than 3 bars to prevent damage to the unit Must remove the jump starter cables from the battery terminal within 30 seconds after the engine is started Not for diesel engines

Here are some other products related to POD X4 Backup Battery (Color: Black)

Polestar Precept Concept: Up Close and Personal With the Sustainability-Crazed EV Concept

The wait is almost over, and the $109,995 2021 Audi RS6 Avant‘s North American arrival is imminent. But what are fans of Audis hotted-up wagon to do if the factory-spec RS6s twin-turbocharged 4.0-liter V-8 engines 591 horsepower just isnt enough to satiate their need for speed Well, maybe ABT has the answer. The Germany-based tuning […] The post ABT Pupil: 2021 Audi RS6-R Wagon Makes 690 HP! appeared first on MotorTrend . ...
>Read More

McLaren 765LT Has a Long Tail, and An Even Longer Price Tag

The 2020 McLaren 765LT is quicker, lighter, and even sexier than the 720Son which it’s based. Oh, and as youd expect, it’s also more expensive, as we now know from official pricing released by McLaren. The newest “Longtail” (that’s the LT in the name) carries a price tag of $358,000. Of course, the 720S isnt […] The post McLaren 765LT Has a Long Tail, and An Even Longer Price Tag appeared first on MotorTrend . ...
>Read More

Ford Mustangs have developed a bit of a meme-tastic reputation over the last few years, thanks to drivers speeding out of cars and coffee meetups and crashing. It’s a case of those owners pushing their cars past their own abilities. Unfortunately, a recent incident on Angeles Crest Highway in California won’t help shake the stereotype. […] The post Boss 302 Driver Ignores Quarantine Orders, Ends Up Driving Off Cliff appeared first on MotorTrend . ...
>Read More

The news lately has been impossible to miss: As COVID-19 cases overwhelm hospitals in hard-hit regions, those regions beg for more ventilators to help the badly affected breathe. And there just dont seem to be enough. Ford and GM are building ventilators to meet the need, and the President is using the Defense Production Act […] The post Tesla’s COVID-19 Ventilator Is Packed Full of Model 3 Parts appeared first on MotorTrend . ...
>Read More

At some point, Bob Regehr had an idea. We dont know when or where it happened--in the shower at the breakfast table during a nightcap--but the idea was to create the Moon Walk bouncy house, an inflatable contraption for kids to jump in. At that point, Bob Regehr owned a few gas stations, but it […] The post Bouncy House Kings Secret Car Collection Up for Sale appeared first on MotorTrend . ...
>Read More

In recent years, Hyundai has bulked up or revised its American SUV lineup to include the subcompact Kona crossover, the Palisade large three-row, and everything in between. This year, the expansion and updates will only continue. What appears to be the 2020 production schedule for Hyundais Ulsan, Korea, plant has surfaced online, and if accurate, […] The post Coming Soon from Hyundai A Performance Kona N, Spicier Elantra, and More appeared first on MotorTrend . ...
>Read More